UPDATE ON THE SIX KEY METRICS

Insights are based on data derived from nearly $26 billion in legal spending, almost six million invoices, and approximately 1.5 million matters processed through the CounselLink platform. The key metrics are based on 2016 charges billed by outside counsel.

THE GAP BETWEEN PARTNER HOURLY RATES FOR “LARGEST 50” FIRMS AND THE “SECOND LARGEST” FIRMS CONTINUES TO GROW. The “Largest 50” firms with more than 750 lawyers have billable rates that are 40% higher than the next tier of firms (501-750 lawyers). This represents a substantial change since the last Trends Report, when the difference was 30%.

LAW FIRM CONSOLIDATION HAS INCREASED SINCE THE LAST TRENDS REPORT
Of the companies in the CounselLink data pool, 62% have 10 firms or fewer accounting for at least 80% of outside counsel fees. This represents a 5 percentage point increase over the numbers reported in the Trends Report released in 2016.

OVERALL USE OF ALTERNATIVE FEE ARRANGEMENTS SHOWS A SMALL UPTICK
The percentage of all corporate matters under an alternative fee arrangement (AFA) in 2016, as well as the total dollars billed, has increased by just .5% compared to 2015. Finance, Loans and Investments; IP-Trademark; Commercial and Contracts; and Mergers and Acquisitions show the greatest increase in AFA activity since the last Trends Report.

WE CONTINUE TO OBSERVE SIGNIFICANT RATE INCREASES IN THE INDUSTRY, ALTHOUGH GROWTH IS VARIABLE ACROSS GEOGRAPHIES.  Three cities – Boston, Seattle, and Washington, D.C. – show rate growth of 3.5% or more both in the short term (1 year) and longer term (3 year compound annual growth rate, or CAGR). On the opposite end of the spectrum, three cities – Detroit, Miami, and Philadelphia – had hourly rate growth of less than 2.5% in both metrics.

The first edition of the CounselLink Enterprise Legal Management Trends Report was published in October 2013. The inaugural report established a set of key metrics and provided insights that corporate law departments and law firms could use to guide their decisions and subsequent actions. This edition of the Trends Report presents the latest review of those guiding metrics, adding additional detail to the growing historical perspective on how legal market dynamics are evolving over time.

You can find details about the methodologies used, definitions, and expert contributors conducting the analysis presented at the end of the report.

Each annual update of the CounselLink Enterprise Legal Management Trends Report covers a standard set of key metrics related to hourly legal rates and the corporate procurement of legal services. 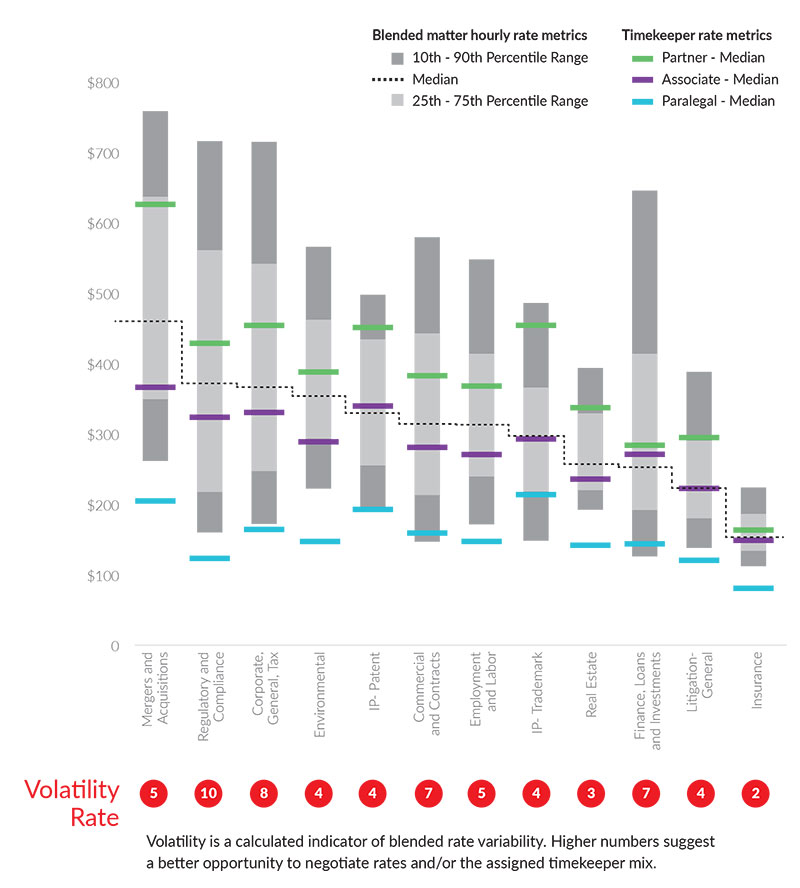 Interpreting the Chart:
The chart on page 6 captures median rates for three different groups of timekeepers (partners, associates, and paralegals) and the range of the blended average hourly rate across multiple matter types. As a guide to interpreting the output, consider IP-Patent compared to Corporate, General, Tax. These two categories have somewhat similar average hourly partner rates – $458 and $460, respectively – but IP-Patent work requires significantly less partner time. The result is a noticeably lower blended median rate for IP-Patent work ($332) versus the same rate for Corporate, General, Tax ($369).

Although individual lawyer rates are the focus of considerable industry attention, it is equally, or arguably more important, to look at the bigger picture – the blended average rate of the different timekeepers that work on a matter. The chart shows that the median blended hourly rate is highest for Mergers and Acquisitions, where the most expensive firms are more often involved and with a great amount of
partner engagement.

Six matter types have a relatively low Volatility Index (4 or lower), which means rates are consistent and less subject to negotiations between corporations and their firms.

Rates across most practice areas are rising relative to prior reports, however, most notably for:

The overall trend of rates is down slightly for Litigation and IP – Trademark practice areas.

Legal departments can compare their own data against these rates and ranges for help in managing costs. If they are currently paying at the top end of the range for more volatile matter types, there may be an opportunity to negotiate lower rates or to request a different mix of timekeepers to reduce costs. Note, however, that when looking at trends, it is important to evaluate the entire range of rates rather than focusing solely on the median rate. 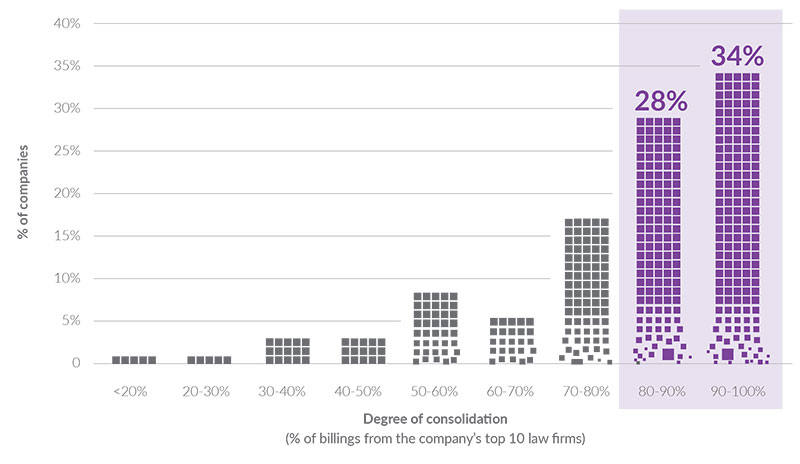 Industry type plays a significant role in consolidation. The segments noted below, reflecting high and low degrees of consolidation, were also identified as such in earlier Trends Reports:

Overall, corporations with high levels of law firm consolidation have increased significantly (from 57% to 62%) since the last Trends Report.

Alternative Fee Arrangements were used in 9.9% of matters and 7.5% of billings in the past year
Based on 2016 data 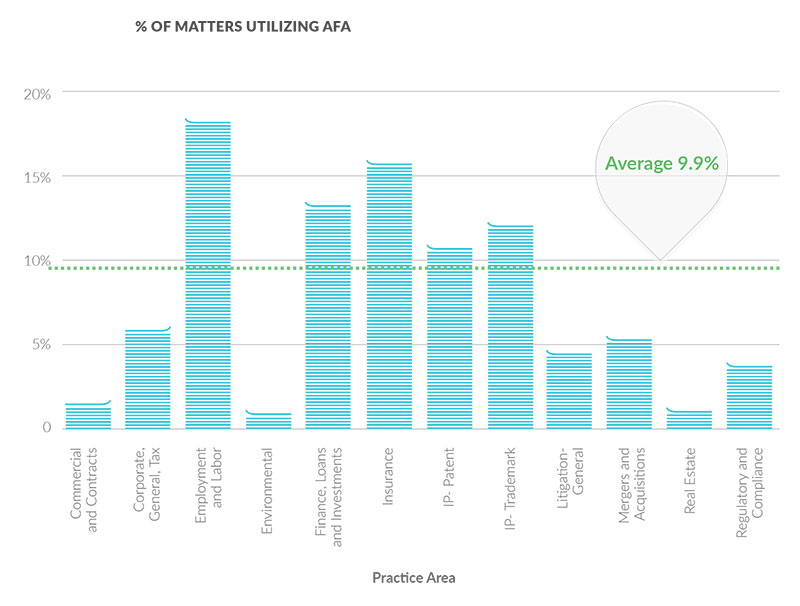 Overall use of AFAs remains fairly stable relative to previous reports, with both the percentage of matters billed under an AFA and the total dollars billed under an AFA increasing by .5 percentage points compared to 2015. Practice areas with increased AFA activity since the last Trends Report include Finance, Loans and Investment; IP-Trademark; Commercial and Contracts; and Mergers and Acquisitions.

Alternative Fee Arrangements were used in 9.9% of matters and 7.5% of billings in the past year
Based on 2016 data 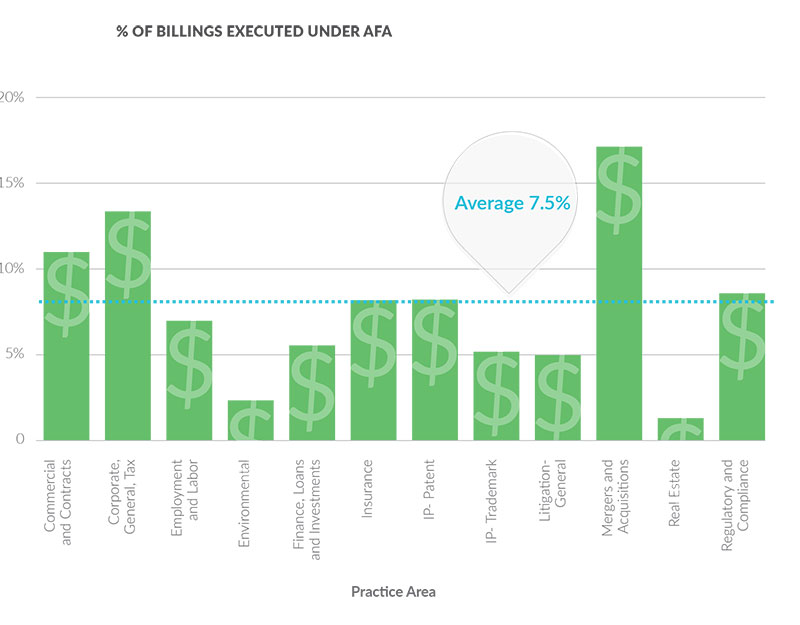 We have observed that recently, more high-cost matters, or portions of those matters, are being billed under some form of an AFA. We will continue to monitor this trend and detail our findings in subsequent Trends Reports. 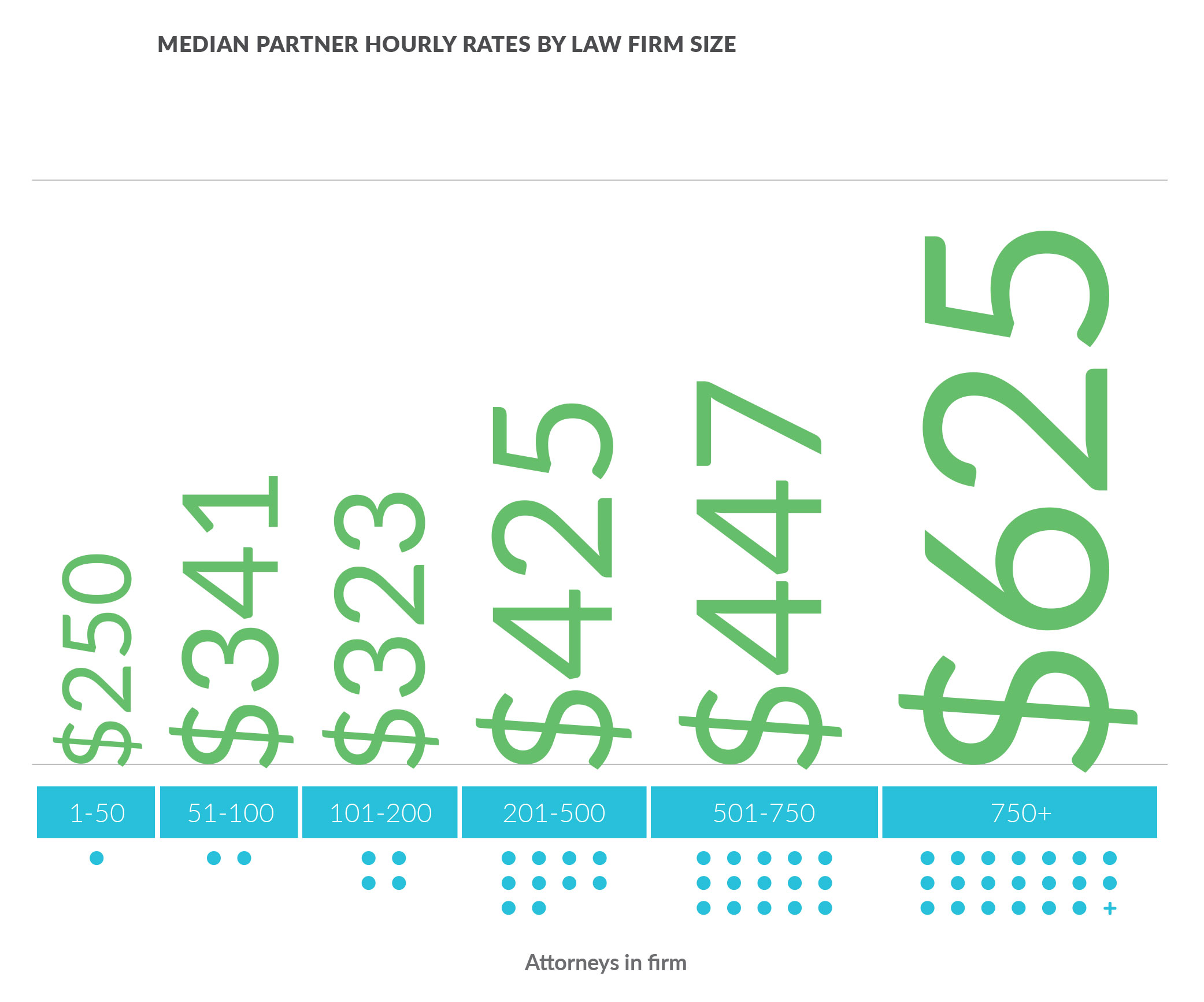 The gap between the average partner rates at the “Largest 50” firms (those with 750+ lawyers) and those at the “Second Largest” firms (501-750 lawyers) has widened since our last report. Firms with more than 750 lawyers have billable rates that are now 40% higher than the next smaller tier of firms (501-750 lawyers), compared to 30% in the previous Trends Report.

Three major cities show rate growth of 3.5% or more over both the last year and the last three years
Based on 2016 data 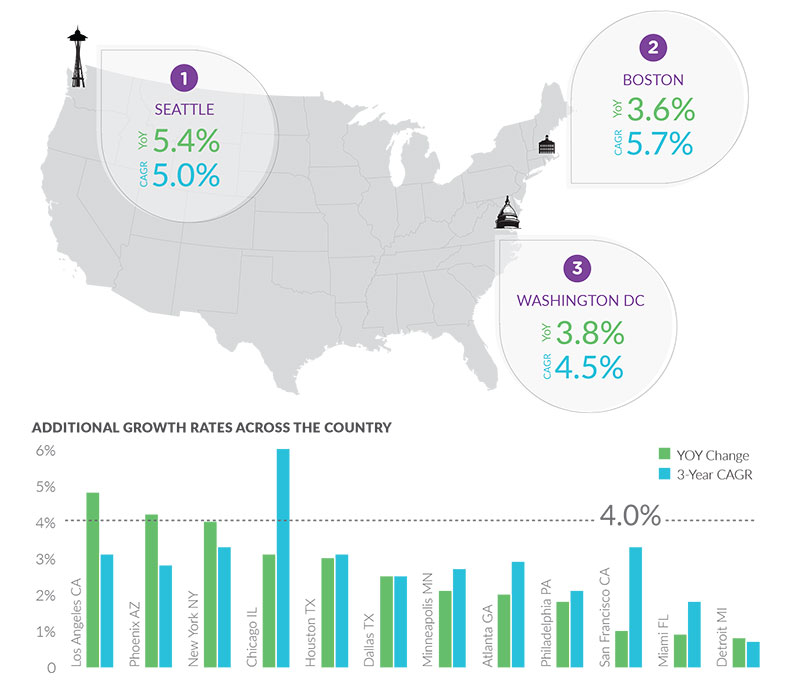 Interpreting the Chart:
In looking at unique partner hourly rates across 15 major metro areas, two indicators were plotted for each location to show both the year-over-year change and the compound annual growth rate (CAGR) over a three-year span.

Data for attorney rate growth by major U.S. city show that Seattle, Boston, and Washington, D.C. are at or above 3.5% in both CAGR and annual growth rate. At the opposite end of the spectrum, three cities – Miami, Detroit, and Philadelphia – experienced hourly rate growth below 2.5% in both metrics.

Growth in partner rates varies by state, averaging 3% year-over-year
Based on 2016 data 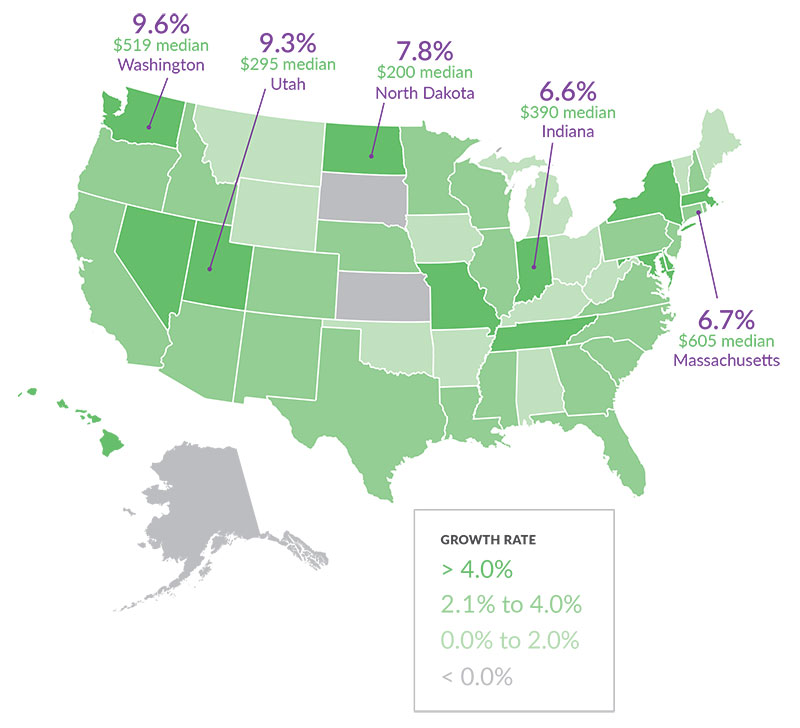 The average growth in partner rate is accelerating, with the average year-over-year growth for partner hourly rates across all states increasing from 2.5% in 2015 to 3% in 2016. 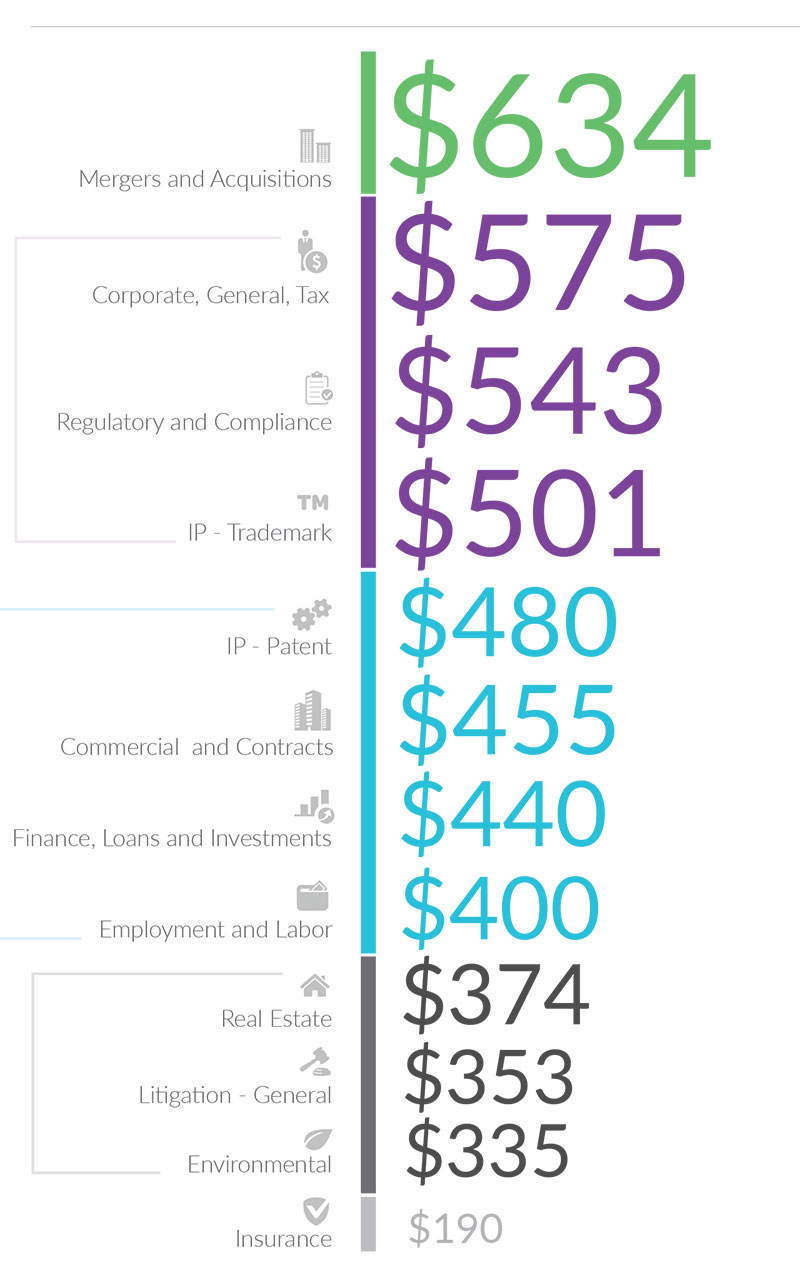 Aggregate statistics based on CounselLink invoice data identify Mergers and Acquisitions as the practice area with the highest partner rate – $634. Next is Corporate, General, Tax (which includes advice and counsel, antitrust work, and tax-related matters), followed by Regulatory and Compliance. In part, both practice areas at the top occupy those spaces because companies often use larger firms for these kinds of matters. In the last 12 months, the “Largest 50” firms handled 36% of Merger and Acquisition work, and 48% of Corporate, General, Tax legal work, versus 29% for all other types of legal work. At the lower end of the average hourly rate spectrum is insurance work. Insurance companies demand and negotiate aggressively for low rates on their commodity defense matters. 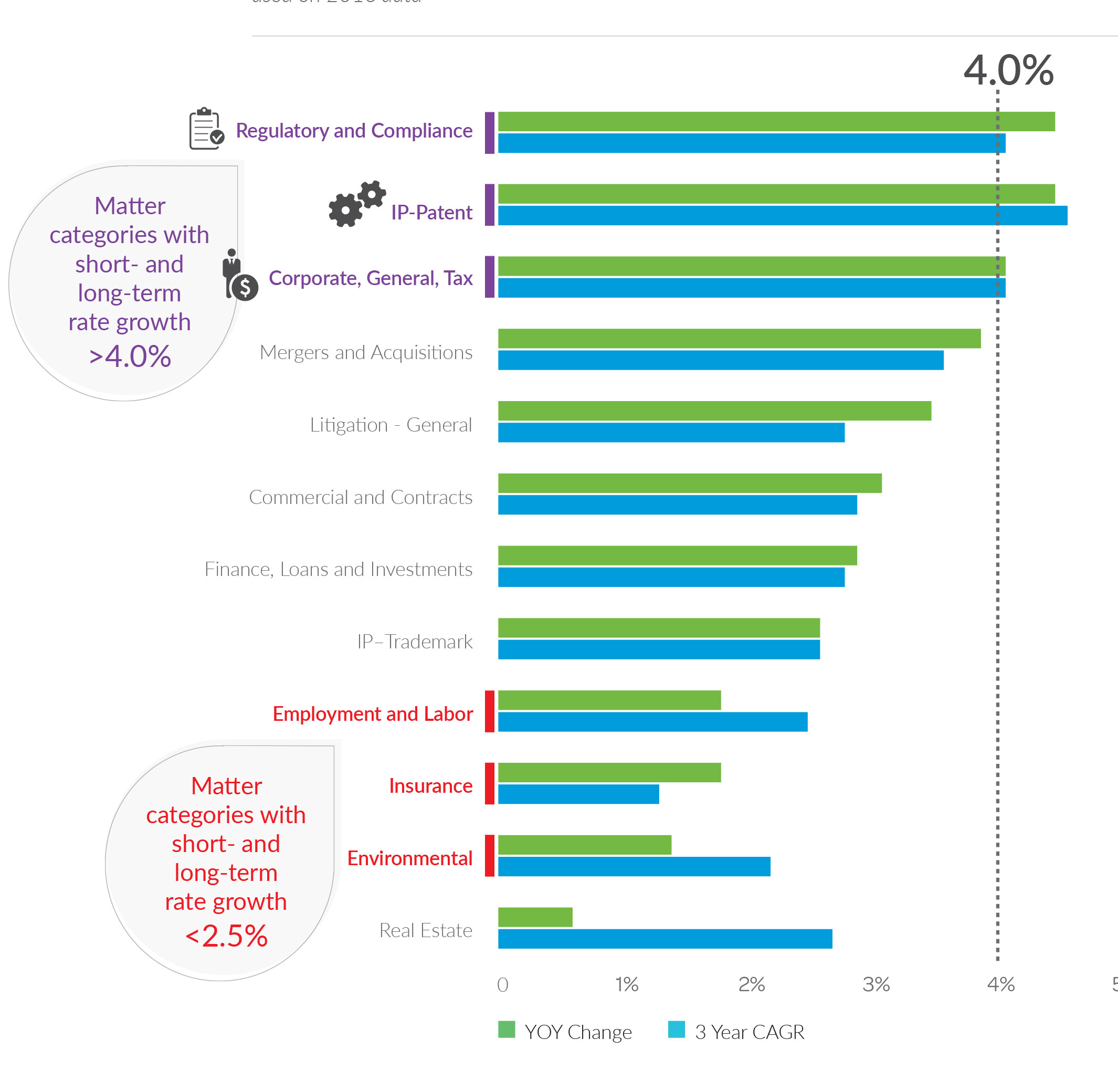 Turning to partner rate growth by practice area, 3 of the 12 practice area categories have shown growth at or exceeding a 4% rate during the past year and over the previous three-year period: Regulatory and Compliance; Corporate, General, Tax; and IP-Patent.

Partner rates for Insurance, Employment and Labor, and Environmental are growing notably more slowly than rates in other practice areas.

TERMINOLOGY:
Matter Categorization – CounselLink solution users define the types of work associated with various matters that were analyzed and categorized into legal practice areas. For this analysis, all types of litigation matters are classified as “litigation,” regardless of the nature of the dispute.

Company Size – Based on revenue cited in public sources, companies were grouped into these three size categories:

Company Industry – Companies were mapped into the NAICS hierarchy based on publicly available information:

LexisNexis individuals making notable contributions to this latest Enterprise Legal Management Trends Report in the analysis of CounselLink data and in preparing the surrounding narrative include:

Kris may be reached at kristina.satkunas@lexisnexis.com.

Focused on the core CounselLink solution and its capabilities for Matter Management, Legal Spend Management, and Legal Hold, Justin  is responsible for all aspects of product and market strategy and the end-to-end experience for corporate legal department customers. He joined the CounselLink team in 2011, coming from a two-year assignment as Senior Director of Global Strategy and Business Development for LexisNexis. Prior to that, he managed a professional services business at Gerson Lehrman Group, and also acquired more than six years of management consulting experience, equally split between Oliver Wyman and the Boston Consulting Group. He earned a J.D. degree from Northwestern University Law School, and an MBA from the Kellogg School of Management.