Based on data derived from outside counsel invoices processed through the CounselLink platform. Information is based on the trailing 12 months ending June 30, 2015, unless otherwise noted.

The first edition of the LexisNexis Enterprise Legal Management Trends Report was published in October 2013. The inaugural report established a set of key legal services industry metrics and provided insights corporate counsel and law firms can use to guide their decisions and subsequent actions. This fifth and latest edition of the Trends Report presents a mid-year review of those guiding metrics, helping to create a more detailed historical view of how legal market dynamics are evolving over time.

As always, the report presents a snapshot of data available via the CounselLink Enterprise Legal Management platform. The collective stream of data and processed invoices aggregated since 2009 comprise more than $18 billion in legal spending, more than four million invoices, and well over one million matters, with the volume of data available for analysis growing at a rapid pace.

Details about the methodologies used, definitions and expert contributors conducting the analysis are presented at the end of the report.

Each semi-annual update of the Enterprise Legal Management Trends Report covers a standard set of key metrics for hourly legal rates and the corporate procurement of legal services from law firms. 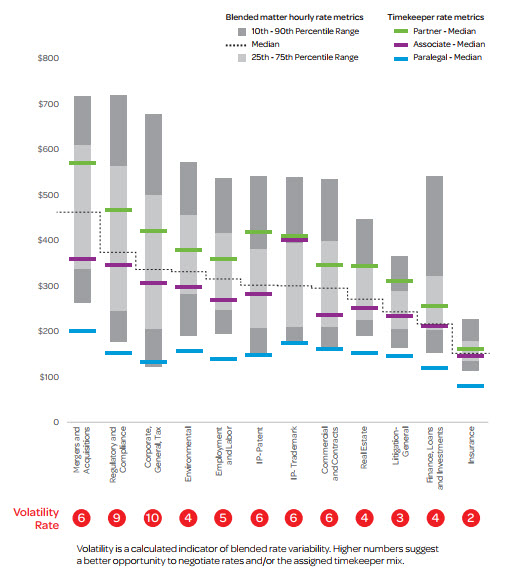 Comparing IP – Trademark to Insurance as an example, the spread between the 25th and 75th percentiles of blended hourly rates for IP – Trademark work is broader than that for Insurance. On a 10-point scale, IP – Trademark has a Volatility Index of 6, while Insurance has an Index of 2, indicating that the mix of timekeepers and rates paid on these matters varies more significantly than the mix for Insurance. A high volatility index could also be an indicator of a wide variety of matter types being represented in this category.

Although individual lawyer rates are the focus of considerable industry attention, it is equally, or arguably more, important, to look at the bigger picture – the blended average rates that result when a mix of different timekeepers works on matters. The chart shows that the median blended hourly rate is highest for Mergers and Acquisitions, where the most expensive firms are more often involved with a great amount of partner engagement.

Five matter types have a relatively low Volatility Index, which means these rates are consistent and less subject to negotiations between corporations and their firms:

Legal departments can compare their own data against these rates and ranges for help in managing costs. If they are currently paying at the top end of the range for more volatile matter types, there may be an opportunity to negotiate lower rates or to request a different mix of timekeepers to reduce costs.

From a trending standpoint, median matter rates for Mergers and Acquisitions have increased the most since the last report.

Key Metric #2:
Law Firm Consolidation – Number of Legal Vendors Used by Corporations
55% of companies in the data pool have 10 firms or fewer accounting for at least 80% of outside counsel fees
Based on trailing 12-months ending June 30, 2015 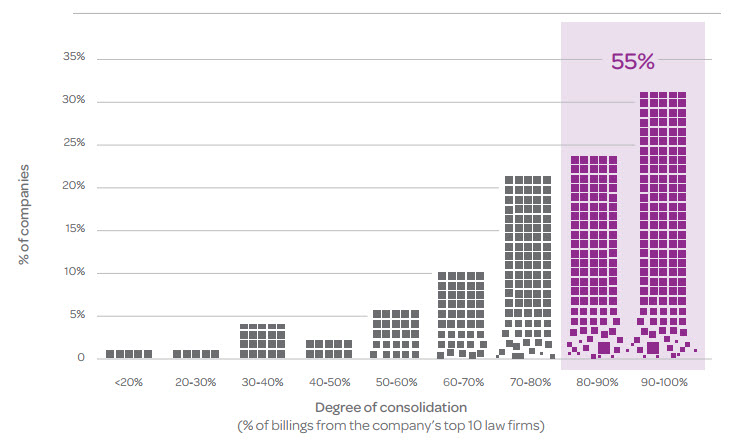 The number of law firms who have consolidated at least 80% of their work with 10 firms or fewer has increased by 5% in comparison to 2014 data.

Industry plays a significant role in consolidation. The segments noted below, reflecting high and low degrees of consolidation, were also identified as such in earlier Trends Reports: 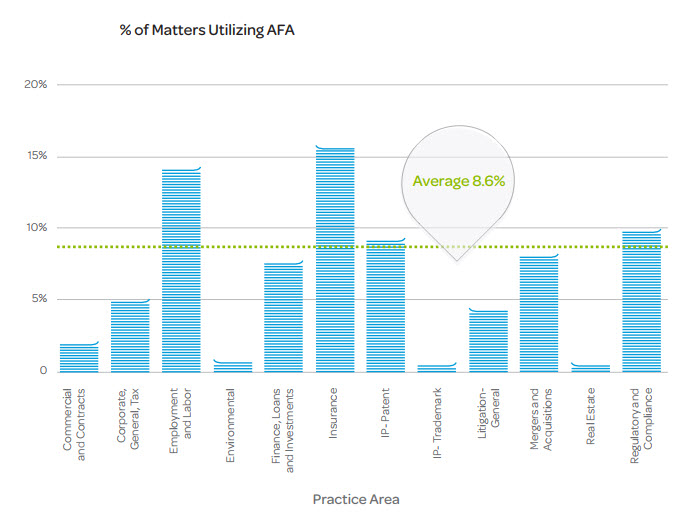 The use of AFAs to govern legal service payments varies significantly by legal matter type, but overall, remains fairly stable relative to previous reports. Over the 12-month period ending June 30, 2015, 8.6% of matters submitted and processed via the CounselLink solution  were invoiced, at least in part, under a fee arrangement other than traditional hourly billing. This represents a 0.8% decrease in usage since the last Trends Report. Four categories of legal work came in above the average, with Employment and Labor, Insurance, IP – Patent and Regulatory and Compliance in the top spots where AFAs are most often in place. Commodity-type work such as Insurance and Employment and Labor have tended to have the highest volume of matters billed under AFAs. 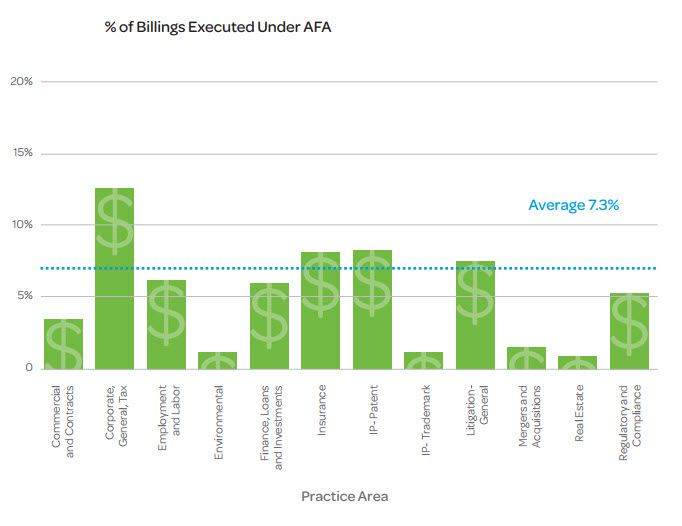 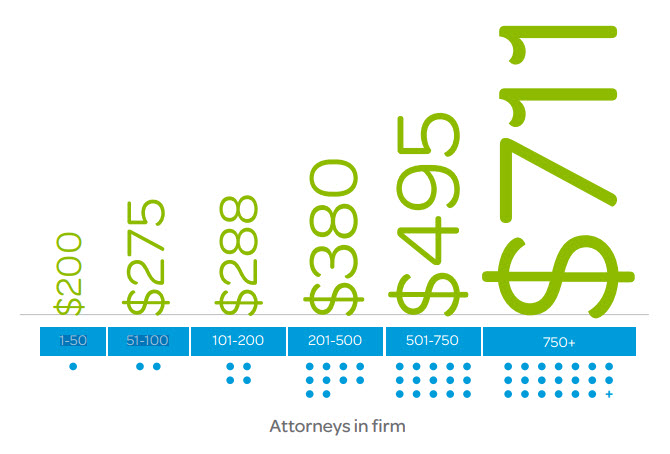 Key Metric #5: Partner Hourly Rate Growth – by Location (City)
Four major cities show rate growth of 3.5% or more both over the last year and over the last three years
Based on trailing 12-months ending June 30, 2015 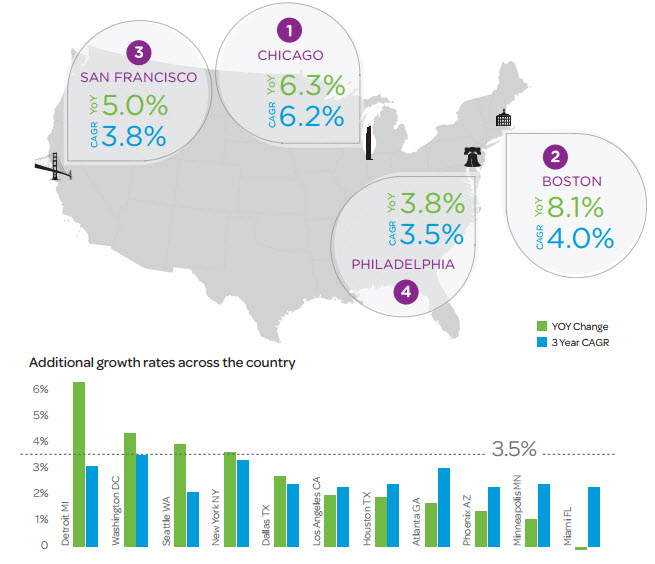 In looking at unique partner hourly rates across 15 major metro areas, two indicators were plotted for each location to show both the year-over-year change and the compound annual growth rate (CAGR) over a three-year span. 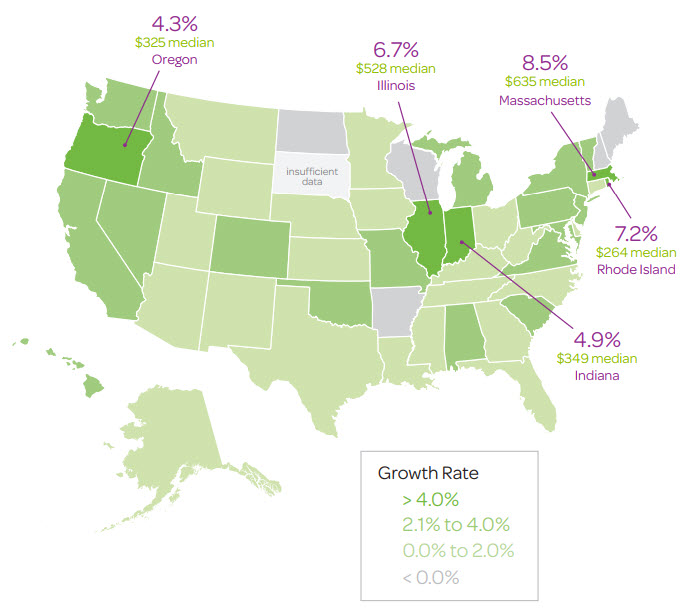 The median year-over-year growth for partner hourly rates across all states is 2.0%. 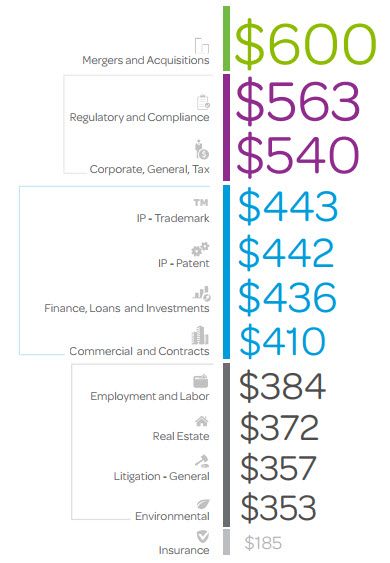 Aggregate statistics based on CounselLink solution invoice data submitted in the last 12 months identify Mergers and Acquisition as the practice area with the highest partner rate of $600. Next is Regulatory and Compliance, followed by Corporate, General, Tax, which includes advice and counsel, antitrust work, and tax-related matters. In part, all three of these practice areas at the top of the rate range occupy those spaces because companies often use larger firms for these kinds of matters. In the last 12 months, the “Largest 50” firms handled 37% of Merger and Acquisition work, and 34% of Regulatory and Compliance legal work, versus 24% for all other types of legal work. At the lower end of the average hourly rate spectrum is insurance work. Insurance companies demand and negotiate aggressively for low rates on their commodity defense matters. 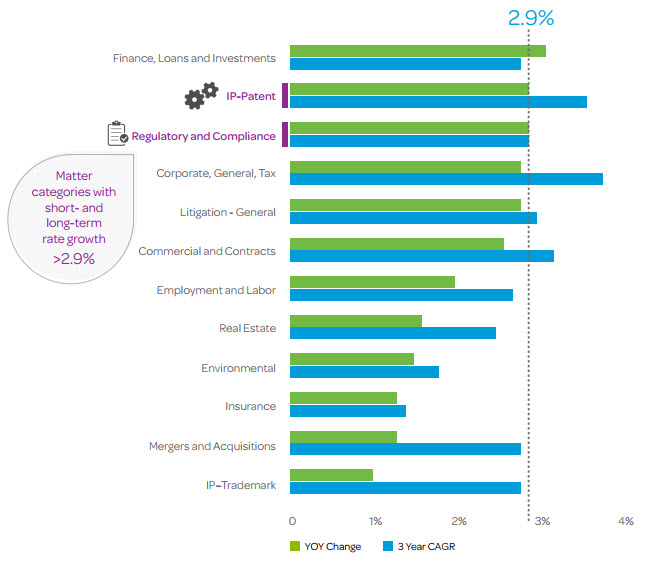 Turning to partner rate growth by practice area, two of the 12 practice area categories have shown growth at or exceeding a 2.9% rate during the past year and over the previous three-year period: Regulatory and Compliance and IP-Patent.

Partner rates for Insurance and Environmental are growing more slowly than rates in other practice areas.

About the Trends Report