Size does matter, at least when it comes to law firm billing rates.

According to findings from a new CounselLink Enterprise Legal Management (ELM) Trends Report from LexisNexis, partners in the nation’s “largest 50” law firms earn significantly more than those in the second-largest group.

“We’ve always seen a pretty big difference for these two groups, but the fact that the divide continues to get wider is eye opening,” said Kris Satkunas, Director of Strategic Consulting for CounselLink.

The uptick is noteworthy, she says, because it represents a significant increase from the findings reported in the previous Trends Report, when the rate gap was only 30 percent.

Putting these numbers into context, partners in the largest 50 firms charge a median hourly billing rate of $625 per hour, versus those in a second largest group who charge almost $180 less for every hour: $447. And as law firm size decreases, median partner billing rates continue to drop: 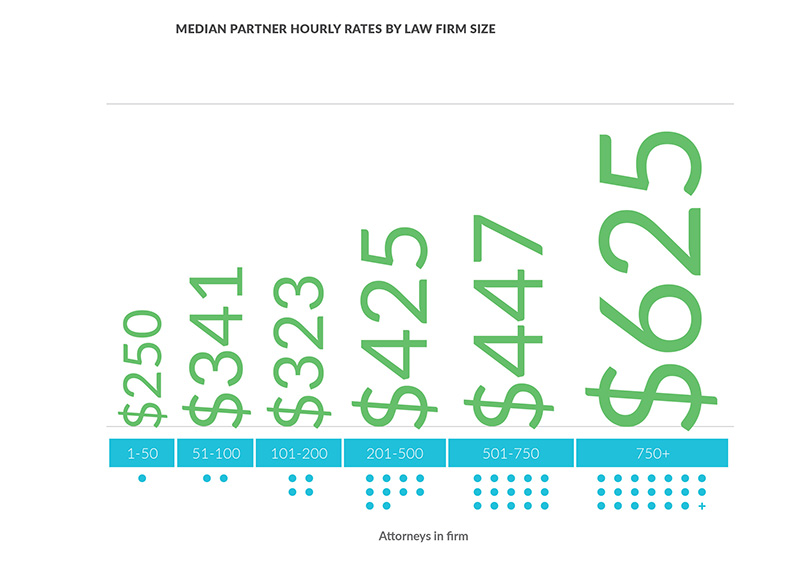 The survey also shows corporate clients whittling down their rosters of outside law firms.

According to the latest Trends Report, more than 60 percent of companies in the CounsellLink data pool use 10 or fewer firms to account for at least 80 percent of their outside legal work. As you can see from the chart below, very few companies are continuing the practice of maintaining larger numbers of law firms on their rosters 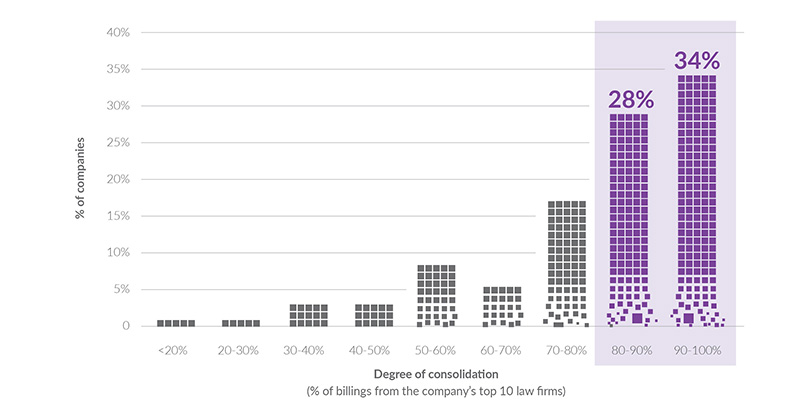 “Law firm consolidation has increased since our last report,” said Ms. Satkunas. “I think the trend will likely plateau at some point, but I don’t see it reversing”

Overall, the report shows companies with high levels of law firm consolidation have increased substantially, from 57 percent up to 62 percent.

The lowest rate of consolidation is in the insurance industry, where only 42 percent of CounselLink users continue to use larger numbers of firms.

One area that has remained relatively stable is the use of Alternative Fee Arrangements (AFAs). The latest Trends Report shows only modest increases in that area with both the percentage of matters billed under an AFA and the total dollars billed under an AFA increasing by just one-half of one percent compared to 2015.

Other practice areas showing increases in AFAs since the last Trends Report:

To learn more about these and other notable findings included in the latest ELM Trends Report, download a free copy of the report now.

Coverage of previous editions of the report can be found here: