Property and casualty (P&C) insurance claims departments face a multitude of challenges. They have to balance loss costs, help prevent fraud, and keep expenditures down – all while offering quality customer service, fair settlements and appropriate payments. This means the pressure to maximize operating efficiency is unrelenting. We wanted to learn what cost-savings initiatives P&C carriers were implementing to reduce the pressure – and how they viewed the effectiveness of the various initiatives they have adopted. We were specifically interested in learning about cost containment measures aimed at reducing Allocated Loss Adjustment Expense (ALAE), and if possible, the even narrower focus of allocated legal loss adjustment expense. To find out, LexisNexis conducted an online survey of U.S.-based property and casualty insurance companies between June 16 and July 2, 2015. The survey focused on internal professionals handling litigation for the carriers, whether in the Claim or the Law Department. A total of 86 respondents, whose titles included VP of Claims, Attorney, Associate/General Counsel, Staff Counsel, Head of Litigation and others, responded to the survey. The outside counsel spend of the companies surveyed ranged from less than $10 million to more than $500 million.

We asked respondents the open-ended question: “What single cost-control initiative planned for implementation in 2015/2016 do you view to be the most relevant and important to your litigation management program?” Responses covered a wide variety of measures and could be grouped into the following four general categories: When it comes to Early Case Assessment/Litigation Prevention, the importance of early evaluation of cases was reflected in one respondent’s comment that the key cost initiative in 2015/16 was to “Complete thorough investigations and complete case assessment as  soon as possible.” Others focused on evaluating the claims more effectively “…to arrive at a fair settlement figure in order to avoid litigation costs,“ while another stated they are trying to move “… to Mediation sooner rather than later.” The implication is that the sooner a case can be assessed, the sooner it can be settled – thus reducing Allocated Loss Adjustment Expense (ALAE). Reducing litigated claim defense costs was very straightforward, with respondents stating simply that their key initiative for 2015/16 was to “Control defense costs,” or to attain a “Reduction of defense costs.“ More interestingly, one respondent stated that efforts would be focused on getting to an “Agreed litigation plan and sticking to it,” implying the need for rigorous matter and case management along with vendor management. From a Vendor Management perspective, key initiatives for 2015/16 included a wider range of measures, including such things as “Choosing the right attorney for the claim,” or “Downsizing and/or changes in our pre-approved law firms.” Other respondents focused on “Moving to regional counsel,” or “Working with panel counsel to cut costs,” as well as the “Retention of cases in house.“ Bill Review System Process also contained a wide variety of initiatives from “Legal bill review training of staff adjusters,” “Auditing legal billings,” and “Bill review of defense billings,” as well as “Initiating 3rd party bill reviewer,” and “Centralized review of billing and budget.”

Q. What single cost-control initiative planned for implementation in 2015/2016 do you view to be the most relevant and important to your litigation management program?

When asked which is the higher priority for them, 72 percent of the respondents stated that both “Reducing the legal cost of defending a claim,” and “Reducing settlement cost/loss,” are equally relevant priorities for their departments. Twenty-two percent of our sample reported that “Reducing the legal cost of defending a claim,” was a higher priority than “Reducing settlement cost/loss,” while fewer than 6 percent of respondents said that reducing settlement cost/ loss ranked as the higher priority. Clearly, the majority of P&C claim legal professionals don’t consider reducing either settlement cost or loss as a sole key objective. The fact that the majority of the respondents are just as concerned about reducing defense costs shines a spotlight on the dynamic fiscal tightrope that departments must navigate when deciding whether to settle a suit or to continue with litigation. Companies are looking at the big picture or whole cost of the case, avoiding targeting only settlement costs or only legal costs. A strategy with too narrow a focus could negatively impact the combined ratios in their companies.

Q. In 2015, which of the following is the higher priority for your Law Department: 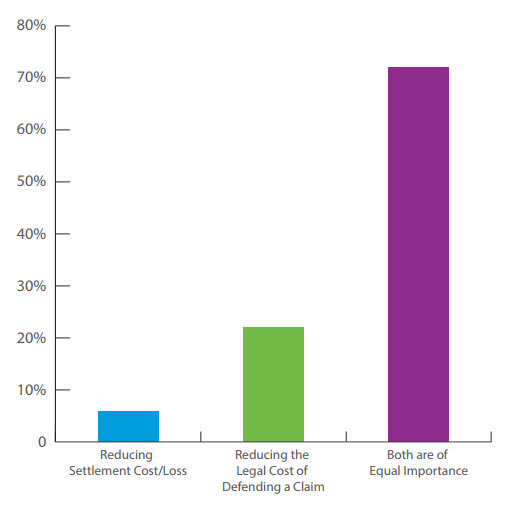 SPENDING MORE ON DEFENSE NOT THE ANSWER

We asked the survey participants if they believed that the more they spend on the defense of a matter the more their loss costs are reduced. Only 7.3 percent responded in the affirmative, with a significantly larger 64.7 percent saying “No.” P&C respondents don’t feel that spending more with outside counsel gets better results or that doing additional legal work on a matter will improve outcomes. With legal costs averaging about one-fifth of the total cost of defending a claim, it appears that good litigation management and aggressive cost control programs may be seen as a more effective way to ensure the best defense. In other words, the issue isn’t necessarily how much a defense costs, but rather, ensuring that the carrier pays the right amount, to the right firm for the right defense.

A VARIETY OF COST CONTAINMENT INITIATIVES ARE IN PLAY

THE MOST POPULAR OPTIONS

Utilization rates of the various initiatives ranged from 44 percent to 76 percent. Five of the nine named options are being used by a majority of the respondents, with Early Case Assessment leading the pack with a 76 percent adoption rate. The next most utilized cost-control initiative is Electronic Billing, in use by 65 percent of the survey respondents. Staffing Control Plans and Flat Fee Arrangements are used by 3 out of 5 respondents (60 percent), while negligibly more than half of the respondents (51 percent) report using Third-Party Bill Review. Of the remaining options, Rate Freezes are employed by 49 percent of the departments surveyed, and Volume Discounts by 44 percent. Just over a third of the respondents (37 percent) reported using Quick-Pay Discounts and a quarter use Discount Rates with Success Bonuses.

THE MOST EFFECTIVE OPTIONS

To find out how effective each of the cost control initiatives being used by respondents were, we asked our survey sample to rate the effectiveness of the initiatives they have adopted. The perceived effectiveness of individual initiatives varied, from a high of 98 percent effective rating for those using Early Case Assessment, to a low of 65 percent effective for departments using Discount Rates with Success Bonuses. Early Case Assessment was seen as the most effective initiative, followed by Staffing Controls/Plans and Electronic Billing, which were tied for the next most effective cost management initiatives, with 93 percent of respondents reporting that those measures are effective. Coming in slightly lower, but still very high on the effectiveness scale, were Volume Discounts (87 percent) and Flat Fee Arrangements (85 percent). Quick Pay Discounts (72 percent) and Third-Party Bill Review were in the 70-percentile range of effectiveness, while Rate Freezes and Discount Rates with Success Bonuses were rated as the least effective, at 67 percent and 65 percent respectively. 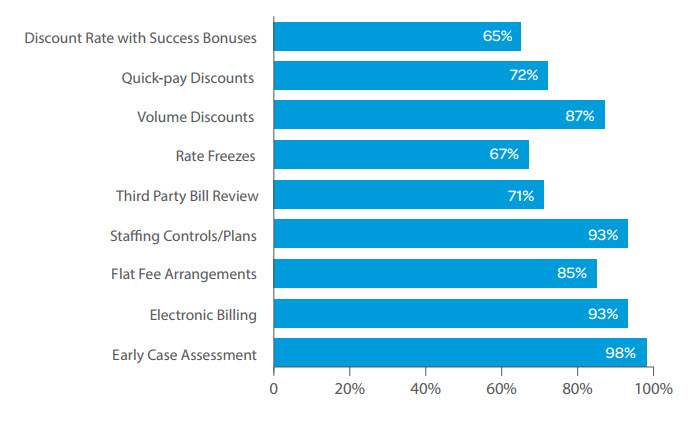 The adoption rates for the five measures rated most effective by 85 percent or more of respondents (Early Case Assessment, Electronic Billing, Staffing Controls/Plans, Volume Discounts, Flat Fee Arrangements) range from a low of 44 percent (Volume Discounts) to a high of 76 percent (Early Case Assessment), indicating that there is ample opportunity for companies to reduce costs by implementing one or more of these measures. For example, more than a third (35 percent) of the P&C claims legal professionals surveyed report that they don’t use electronic billing to control costs. This is surprising, since 93 percent of the departments that do employ electronic billing rate it as either “Effective” or “Highly Effective.” Deployment of an enterprise legal management or ebilling system could have immediate positive impact for these companies. 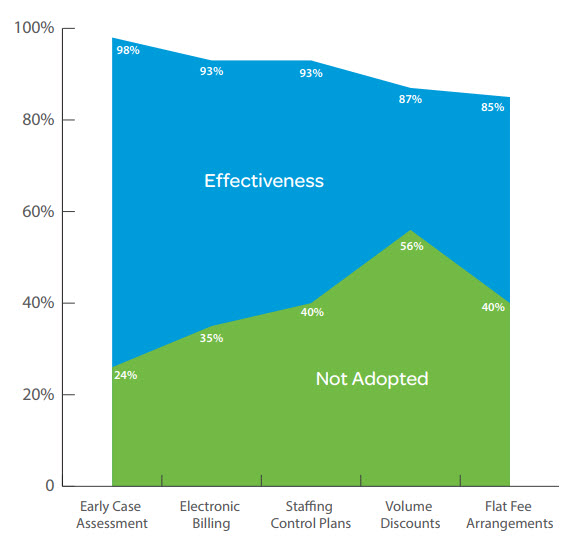 Taking a closer look at the numbers, we observed that 69 percent of the survey participants include some form of alternative fee arrangement (Flat Fee Arrangements; Volume Discounts; Discount Rates with Success Bonuses) in their cost containment arsenal. This finding adds additional detail to observations made in the 2014 year-end Enterprise Legal Management Trends Report, which, among its many metrics and insights, reported that more than 15 percent of insurance matters are billed under an alternative fee arrangement.

CHANGES EXPECTED IN THE NEXT 12 MONTHS

We next asked which departmental changes would occur in the next 12 months in terms of Staffing, Technology Spend, Spending with Outside Counsel and Matters Assigned to Outside Counsel. The respondents indicated that they anticipate a fair amount of stability, with “Remain the Same” responses to the questions ranging from 44 percent to 62.5 percent across the board.

Q. In the next 12 months, how will matters assigned to outside counsel change in your department: 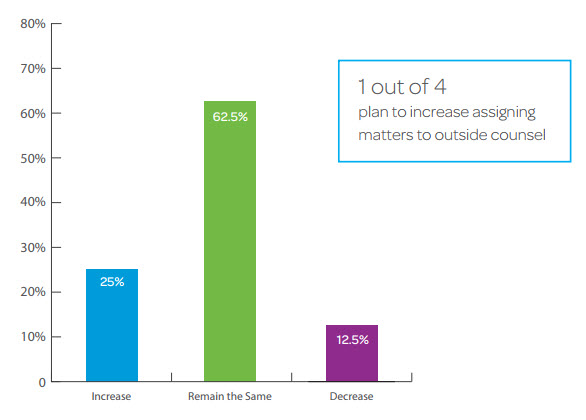 RESPONDENTS ARE SPLIT ON OUTSIDE COUNSEL SPEND PLANS

Outside counsel spending is expected to remain flat (56 percent), with a nearly equal numbers of respondents anticipating either increasing spending (24 percent) or decreasing spending (20 percent). In the 2015 CLM Litigation Management Survey, almost 50 percent of respondents reported expecting an increase in litigation inventory. Our results may reflect a dichotomy of carrier perspectives in that some carriers believe they can positively impact cost by assigning more to outside counsel, while others believe that they can be more efficient in terms of cost per case by keeping matters in-house. Perhaps they feel that while their inventory may increase, their cost containment strategies will work to keep outside counsel spending flat.

Q. In the next 12 months, how will outside counsel spend change in your department: 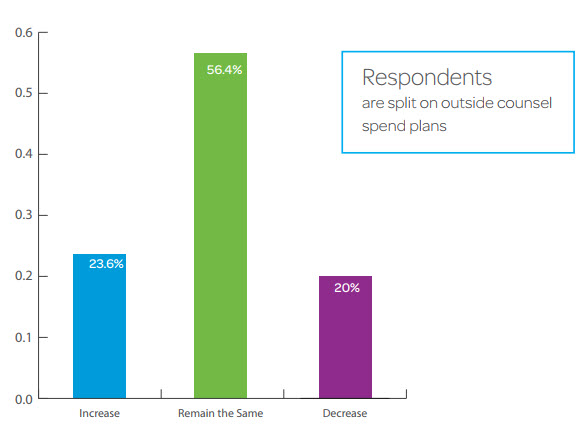 NEARLY TWO OUT OF FIVE RESPONDENTS PLAN TO INCREASE STAFFING

Staffing levels for a majority of carriers (56.5 percent) are expected to remain flat, while almost two out of five (38.7 percent) litigation departments are expecting to grow. Only 4.8 percent reported that they expected to decrease staffing. In other words, more than 95 percent of carriers expect staffing to grow or remain the same in the coming year. Anticipated staffing changes could reflect either a changing mix of case assignments between inside and outside counsel or an increased effort to resolve claims before they become matters.

Q. In the next 12 months, how will staffing change in your department: 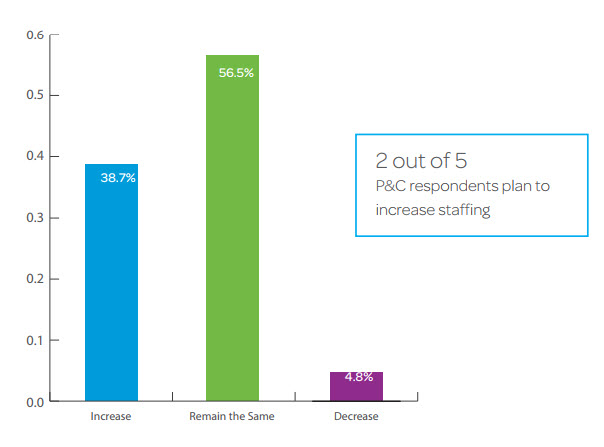 With 98 percent of respondents reporting that they expect their investment in technology to increase (41.4 percent) or to remain the same (56.6 percent), and none of the survey respondents reporting that they plan to decrease their technology spending, technology investment appears to be key to achieving cost control priorities. Maintaining or investing more in technology may be seen by respondents as a way to achieve key priorities centered on operational excellence, litigation management and cost control. Claims and law departments that employ technology – at any level of maturity – obviously recognize its value to their operation. For an in-depth review of how the successful integration of technology, information and processes allows law departments to move up the maturity spectrum and achieve operational excellence, download the Maturity Model white paper.

Q. In the next 12 months, how will technology spend change in your department: 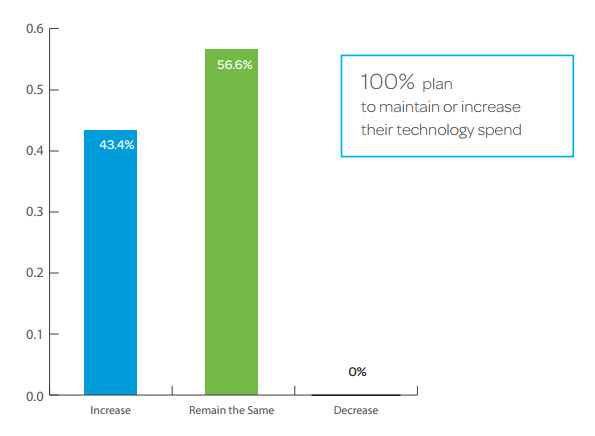