This is the third in a series of online surveys of U.S. Property & Casualty (P&C) insurance carriers that LexisNexis has conducted recently. In this current survey we were interested in learning about the use of alternative fee arrangements (AFAs) by the claims and/or law departments at these carriers. The recently released ACC Chief Legal Officers (CLO) 2016 Survey1 found that AFAs are used most frequently by larger law departments, which certainly describes claims legal in the P&C industry. According to the ACC CLO survey, the use of AFAs by firms globally is increasing across the board, with flat fees (by matter and by matter stage) and retainers reported as being the AFAs used most frequently. And, as we noted in the 2014 year-end Enterprise Legal Management Trends Report, we see that more than 15 percent of all insurance matters in CounselLink are billed under an alternative fee arrangement. In our last P&C survey, published in August 2015, we observed that 69 percent of the survey participants include some form of alternative fee arrangement (flat fee arrangements; volume discounts; discount rates with success bonuses) in their cost containment arsenal. To find out which alternative fee arrangements U.S. Property and Casualty insurance carriers are using, how the departments rate the relative effectiveness of the AFAs they use, and other metrics related to AFAs, we conducted an online survey between January 29 and February 15, 2016. A total of 135 claims and/or law department professionals, whose titles included VP of Claims, Attorney, Associate/General Counsel, Staff Counsel, Head of Litigation and others, responded to the survey. The outside counsel spend of the companies represented in our survey ranged from less than $10 million (42 percent) to more than $500 million (5 percent). That puts the majority of respondents in the $10 – $500 million annual spend.

AFAs are widely used, and are expected to grow in use, although not all law firms are eager to embrace them. Carriers find that AFAs benefit them by helping them predict expenses, lower costs, manage risk better, and more easily measure outside counsel effectiveness. There are still barriers, but insurance companies are reporting that their AFA programs are successful. 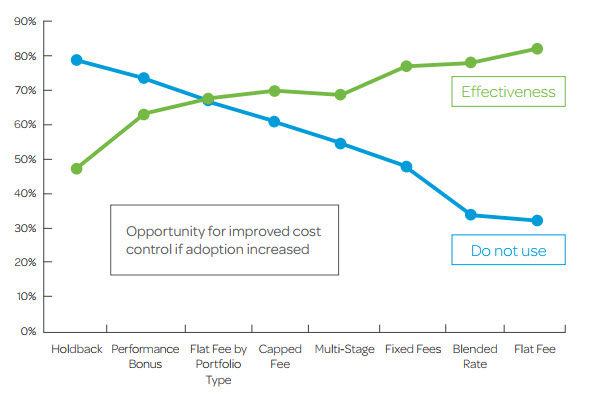 Following is a review of the findings from the P&C Claims and Law Department Survey, concluding with a summary of the key insights that an analysis of the survey responses revealed. To help provide context for the metrics related to the survey respondents’ use of AFAs, we began the survey by asking an open-ended question to learn about the overall challenges the P&C carriers’ law and claims departments face.

We asked respondents the open-ended question: “What are the top 2 challenges facing your Claims and/or Law Department in 2016?” Responses covered a wide variety of issues that could be grouped into the following four general categories: Controlling Litigation Costs/Reducing Costs – In their own words When it comes to controlling litigation costs/reducing costs, the common concern voiced in the comments was that the respondents didn’t want cost reductions to come at the expense of the quality of the legal services their firms provided. Stated another way, both the demand for quality legal work and the requirement to understand and manage costs are equally high. Risk Management – In their own words Responses falling under the risk management category included, In aggregate, the responses indicated a desire on the part of the survey participants to ensure that claims are handled timely and appropriately to minimize financial risk. This is another instance where the respondents reiterated the need for quality legal partners to help them manage the risk of their litigated matters. Vendor Management – In their own words Regarding the vendor management challenges the departments face, comments indicated that retaining quality representation and cooperation between the departments and their firms were top-of-mind issues for the survey respondents. P&C carriers are still searching for qualified representation from law firms they can trust. Measuring Effectiveness – In their own words Verbatim answers that can be categorized as related to measuring effectiveness were the fourth most frequently mentioned type of response. Property and casualty claims and legal professionals are faced with constant pressure to demonstrate their own value in the organization, with their performance measured continually. They are looking for ways to bring that same kind of measurement to the relationships they have with their law firms. Their goal is to demonstrate that they have the right controls in place to deal with outside counsel fees, one of their company’s largest expenses.

We wanted to know which alternative fee arrangements our survey respondents were using. We also wanted to determine the relative effectiveness of the AFAs being employed in terms of how they help them lower costs, increase predictability and/or manage matters. The survey asked participants to rate the effectiveness – ranging from very effective to very ineffective – of the alternative fee arrangements they use. Regarding the various AFAs in use by the survey participants, we learned that: Alternative Fee Arrangement Usage 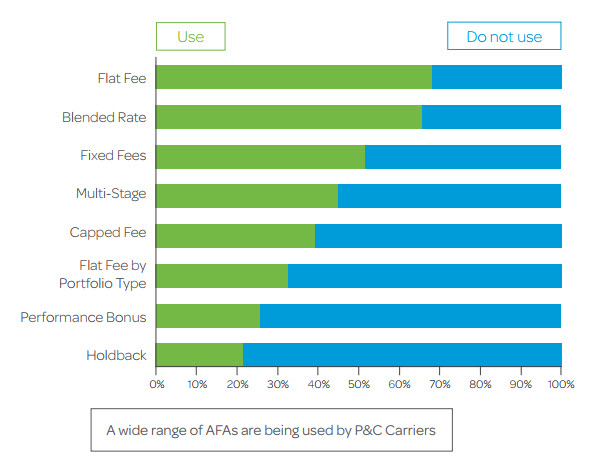 We asked the survey participants to rate the effectiveness of the alternative fee arrangements they use in helping them to lower costs, increase predictability and/or manage matters. Overall, respondents using AFAs report them as effective. Holdback was the only type of AFA that was rated by fewer than half of the respondents as either effective or very effective. All of the other AFAs were rated as either effective or very effective by two-thirds or more of the respondents. Q. Please rate the effectiveness of the following AFAs in helping you lower costs, manage matters and/or increase predictability: 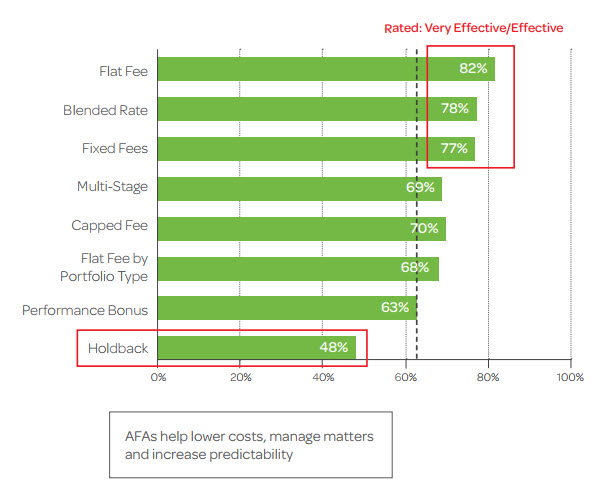 We followed the question about AFA usage/effectiveness with an open-ended question: “What do you believe to be the major benefit of using AFAs?” We grouped the responses to the question into three broad categories: These comments show that AFAs are helping carriers hit all four of their objectives: there is clear cost control, risk management is attained through better reserve planning and alignment of law firms with corporate goals, vendor management is improved through better firm handling and fee management, and the effectiveness is measured through efficient work and case movement in accordance with budgets.

An additional open-ended question sought to identify what the survey respondents believed to be the biggest impediment to using AFAs. We grouped their responses to the question into three general categories: These responses show that there is some concern that AFAs are not appropriate for every matter type and also that firms may not feel incentivized to put in the necessary work for the proper defense. There is also a concern expressed here that AFAs may not be fair to the law firm. 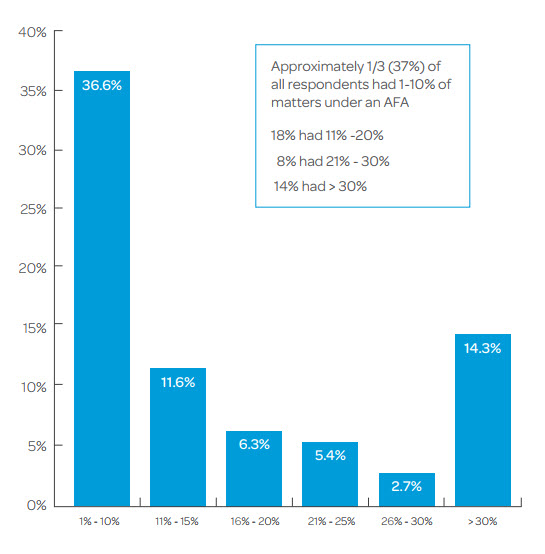 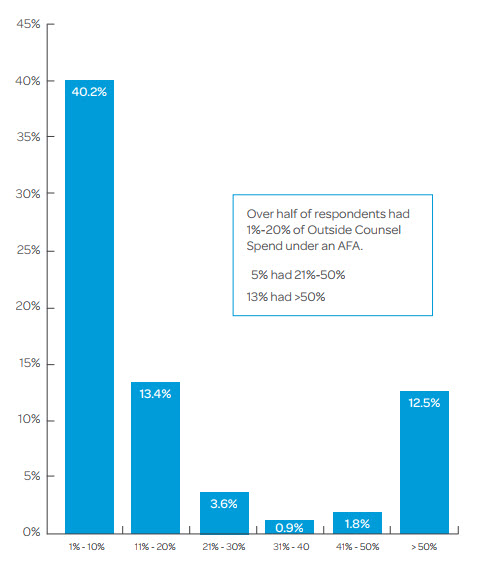 When we asked survey participants how they expected their use of AFAs to change in the next 12 months, nearly half reported that they expect their use to remain the same. Eighteen percent believe that their use will increase, and half that many anticipate that their use of AFAs will decrease. This means AFAs are here to stay – at least for the coming year. Since carriers tend to be measured in their approach to change, AFAs will likely remain beyond the next year, as more than 64% of US insurance companies will be using them next year. Q How do you expect your use of AFAs to change in the next 12 months? 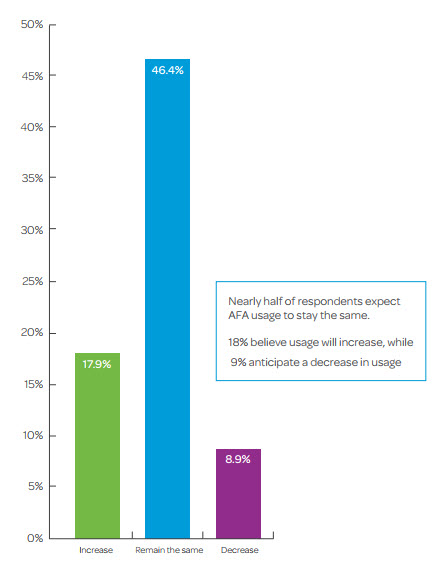 Our next question was directed at learning what challenges the survey respondents encountered when measuring the success of the AFAs they implemented. Responses provided insights into the wide variety of specific challenges they faced when attempting to measure success with using AFAs. Following is a representative sampling of the responses, grouped into three general categories:

For our final AFA-related question, we asked survey participants how they manage compliance with their alternative fee arrangements. We learned that approximately one-third track compliance manually, with an additional one-third tracking compliance with an eBilling system, and one-fifth using a claims system to track AFA compliance. An additional 15 percent reported managing compliance via another method. The opportunity for increased usage may tie itself with the ability to more easily measure the success of AFA programs. AFAs are rated as more efficient, but measuring effectiveness is listed as an impediment. Companies need to look to their eBilling systems for improvements in managing and measuring their AFA success in order to reap greater rewards from these initiatives. Q. How do you manage compliance with your alternative fee arrangements: 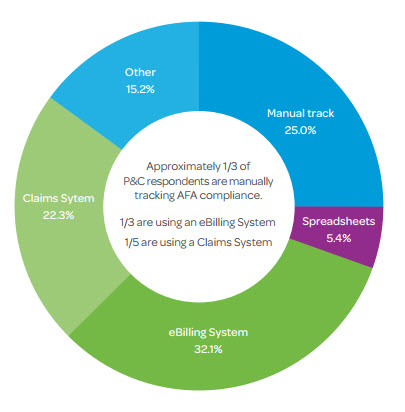