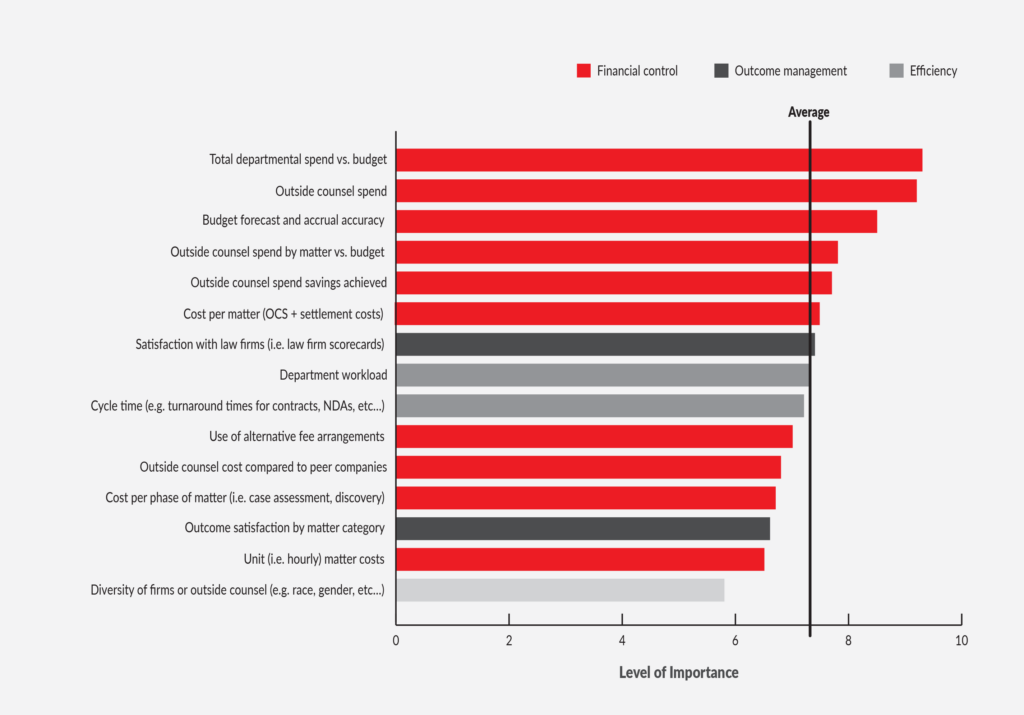 A new LexisNexis CounselLink study conducted in partnership with the Corporate Legal Operations Consortium (CLOC), indicates corporate legal operations professionals rank financial metrics as most important to the legal department. Participants were asked to rate 15 key metrics on a scale of 1 to 10 based on their level of importance to the business.

Each key metric outlined in the study supports one of the following three legal department objectives:

While all of the metrics rated as important among survey respondents, with an average rating of 7.4 out of 10, three relating to financial control were voted most important:

Digging deeper, the study asked participants to rate their level of satisfaction with reporting on the various key metrics.

While they’re overall unsatisfied with their ability to report on the 15 metrics surveyed, with an average rating of less than 5 out of 10, the majority of the financial metrics surveyed rated higher than that average.

According to the report, there’s good reason for the uptick in satisfaction ratings for most financial metrics:

There were some exceptions to the rule, however. The report shows some outliers, or metrics for which the degree of satisfaction in reporting is disproportionately lower than the perceived importance. Such is the case for two metrics, in particular:

In these instances, the report determines legal departments and their vendors should strive to improve their reporting capabilities.

“As legal departments take on an increasingly significant role in supporting corporate objectives, their reliance on metrics and analysis will increase in kind. Knowing which metrics to follow and having the ability (preferably automated) to report on them in meaningful ways will thus become an even more critical part of the legal operations professional’s contribution to the enterprise.”